Little Brother Shaun waited for more than two (2) years to be matched with his Big Brother Ken. When we first met Shaun, his mother described him as talkative, social, loving, compassionate, happy-go-lucky, and not a quitter. Shaun shared with us that he enjoyed drawing, basketball, and playing video games. When Shaun was asked what he wanted from a Big Brother, he said that he wanted an, “older figure” to look up to and, “someone who is smart, active, kind, and someone to play sports and games with.”

Big Brother Ken grew up in Nigeria with his parents and five siblings, and he moved to the United States to be trained as an engineer. Ken believes that his parents were the most influential people in his life and that his grandfather and his pastor have served as mentors by aiding in his professional and spiritual development. Ken shared that he wanted to be a Big Brother because he believes, “it is important to mentor youth and help them develop themselves.”

Shaun and Ken have now been a "match" for just over a year and a half! Their first outing together was to Frankie’s Fun Park where they played putt-putt, arcade games, and got to know each other better. They share a fascination with engineering, soccer, church, video games, and basketball. When we asked Shaun about his relationship with Ken, he stated, “ I am happy when I get to spend time with him.” Shaun’s mom explains, " I am very happy with how things are going between Shaun and Ken and I really like Ken.” “Shaun is like my [actual] little brother" stated Ken. "I care a lot about him and often give him the same advice that I would give to my younger self.”

During a recent match meeting, Shaun shared with us that he is now a member of the National Society of Black Engineers and that he plans to be an engineer like his Big Brother when he grows up. Ken shared that he sees tremendous potential in Shaun When asked to expand, he said, “Shaun desires to be an engineer in the future and I believe he can achieve that because he has a creative mindset. Shaun also displays the humility and respect in all that he does and says, both of which are essential leadership traits.” When we asked Ken what he feels like he has gained from becoming a mentor, Ken replied, “I have a gained a lot... During meetings, I often share personal insights based on my past experiences and mistakes to help Shaun overcome challenging situations. Reflecting on such experiences has made me more appreciative of my achievements and has given me the motivation to accomplish greater things.”

Ken has been a great influence on Shaun by stressing the importance of good grades for entrance in college and competitive engineering programs. When talking about how their match relationship has evolved, Ken state, “Our in-person mentoring relationship is structured such that we alternate between fun activities and study/reading sessions almost every other weekend. Shaun often gets to choose the fun activities that we do.”

We are so happy with how well their match is going and we cannot wait to hear more great stories from these two in the future! 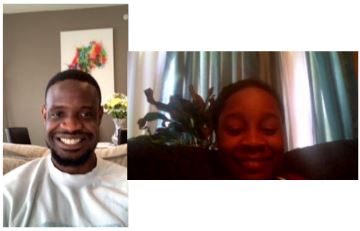